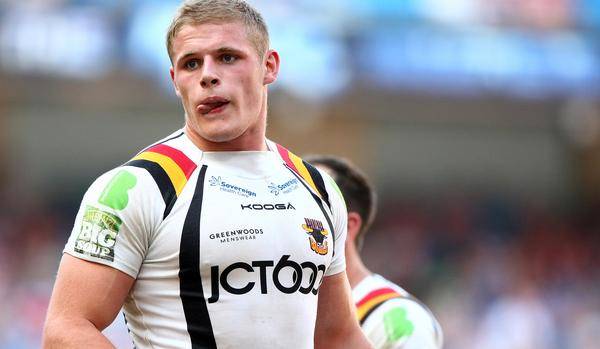 It was almost a carbon copy of their last meeting earlier year in 2012, when Ireland was defeated 62-4 – as once again, the English Knights proved too strong for their Irish opponents, winning 56-4 in the Alitalia European Cup. .

Following their previous win against Scotland, Mark Aston's Irish team was confident coming into the game, but they were outdone by the pace and experience of the English side.

Whilst the end result suggest all one way traffic, the Irish were spirited in defence, with their efforts in the first half in particular praised.

Despite all that, at the break, it was 26-4 in favour of the English Knights, before they turned on the screws and more than doubled their score, to run out eventual winners.

The Irish were forced to defend

set after set, and it was telling, as the English line continued to penetrate the lesser experienced Irish side.

Tom Burgess, who will join Souths for the 2013 season scored twice for the English Knights, with his brother George Burgess scoring once.

Whilst the defeat was a heavy one, Mark Aston said that there were positives to take from the game, with Joshua Toole, Luke Ambler and Matty Hadden all playing well.

â€œThis fixture is important for us, as we are looking to improve for the World Cup because we have to. In 2013 we wonâ€™t be playing just any sides weâ€™ll be facing Australia, the full England outfit and Fiji so we need to be at our best.â€

With Ireland now focused on next year's World Cup, the English Knights will head to Edinburgh to take on Scotland – and should they win, they will be the 2012 Alitalia European Cup champions.