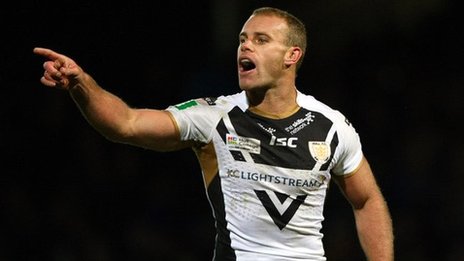 They may have won the game 28-12, but Hull FC coach Peter Gentle was left expecting more out of his side, after they let him in some easy tries in the 2nd half, tries that Gentle felt could have been stopped.

It was a rather clinical display by the Hull backs, but Gentle was critical of the soft nature in which Bradford scored their tries and expects improvement over the coming games.

“We were solid for long periods and we soaked up a lot of pressure. To have kept them to nil at half-time was very impressive,” said Gentle.

“But the tries we let in were soft in the context of the game, we needed to put it to bed. We need to keep our foot on team’s throats.

“We will sort things through. Brett Seymour was sitting in the stands to have a look with us. We made changes in a few positions but the players will be back.

“But we have to learn, we are learning some tough lessons. We now have a quick turnaround to our game at St Helens on Friday and, without taking anything away from Bradford, if we give St Helens as much ball.

“We have to earn the right to play some football. We’ve been doing some special things in training but in games we’re pushing things that aren’t quite there.”

For Bradford coach Francis Cummins, losing Michael Platt to discussion early on did not help their cause – but he was pleased with the overall resilience his side showed to get back into the game, but knows that they too need to improve.

“The lads worked hard but we got dominated early on and allowed Hull to play the way they have trained. But we did well to fight back after losing Michael Platt to concussion,” said Cummins.

“We didn’t always make the right decisions but I am happy with how we came back. Hull defended well but we have to take the positives, which were we looked dangerous at times.”