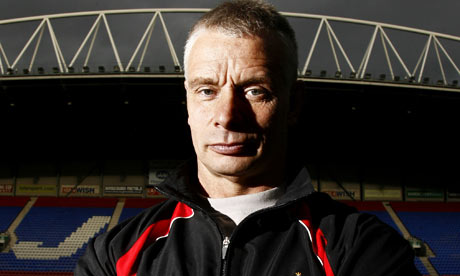 He might only be new to the job but the he has strong backing from owner Marwan Koukash, with Brian Noble promised cash to turn the Salford City Reds into a Super League force.

Noble is no stranger to the world of coaching, having been a former Wigan, Bradford and Great Britain coach, with Salford the second club Noble has taken over when they are languishing at the bottom of the ladder – to add onto that, with the backing of Koukash, Noble is expected to turn the Red’s fortunes around.

The decision was an easy one for Koukash, who said that he knew Noble was the right man for the job.

“Brian truly believes in my vision and knows the potential of the club,” he said.

“More importantly, he’s a very emotionally intelligent leader who will take the club to the next level.”

With a $1.8 million salary cap to use, Koukash says that the club plans to use all of it in 2014, with the owner talking to rival Chairmen in a bid to be allowed to exceed the maximum spend.

“I will provide Brian with all of my support,” he added. “Obviously he will have the ability to spend the full cap for next year and on top of that I’m hoping somebody at the RFL can see sense and allow us to spend a little bit more than the cap.

“When you look at our current squad, we’ve lost the majority of our big players over the last two years because of the financial difficulties of the club so we’re going to be playing catch-up with the rest of the teams.

“To be able to compete with the likes of Wigan and Leeds, Brian will probably need to spend more than the cap itself.

“A successful Salford is only going to promote rugby league in general and I’m hoping everybody in the league will see that and they will vote for it.

“We are in one of the biggest sporting capitals of the world and there is no reason why we can’t create a huge rugby league club here.”

Noble’s last coaching gig was with the now defunct Crusaders rugby league side, with the veteran coach excited by his new role.

“I’ve been saying for about five years that the Manchester and Salford areas have been hugely neglected and there’s an opportunity now to put that right,” he said.

“The scale of this place is immeasurable; it’s a fabulous opportunity.

“Myself and Marwan hope to leave a legacy and the first steps have been taken.”

Noble has already devised a list of players he wishes to target but whilst he expects immediate improvement from the current side, he admits that it will be a long-term process.

“It takes time to build a club and it’s important that we build it in the right way,” he said.

“It’s a really good challenge. I am confident things will change at a quicker pace than most other people.

“First and foremost, the criteria is players have to want to be at Salford. It isn’t any good pulling in a load of mercenaries. It just doesn’t work. The bottom line is you have got to want to be here.

“Signing players of the right quality takes time. The criteria for bringing players in is they have to improve the team so, if there aren’t any available this year, they won’t be brought in.”