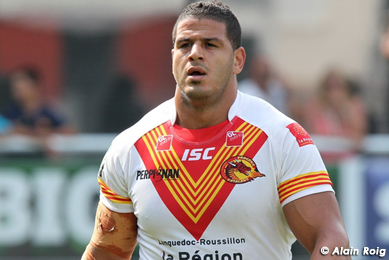 It is never easy to leave a club you have been at for some years and after opting to leave the Catalan Dragons a little while back, French international Jamal Fakir has found a new home – the Bradford Bulls.

His signing is the first under new owner Marc Green and he will remain with the club until the end of the season.

Featuring in France’s 2013 World Cup campaign, Fakir brings experience and for Bradford coach Francis Cummins, he will add some starch to the Bulls’ forward stocks.

â€œWe are extremely happy to have Jamal on board, he will be massive for us going forward,â€ said Cummins.

â€œTo bring in someone of Jamalâ€™s experience and quality at this stage of the season, I would deem a massive coup for this club.

â€œWe only want to bring players here that add something to the team and improve our chances of success. In Jamal, I believe we have done that.

â€œHe brings a great deal of experience, given his impressive track record. Jamal is a player who has appeared on the international stage and â€“ for a number of years â€“ in Super League.

â€œWe are working hard to further bolster the current roster, as we enter the next phase of the season.â€

The Moroccan-born http://gulfcoastretirement.org/admin/generic/ Frenchman is raring to go and get stuck into playing again, and says he will put everything on the line to kick-start the Bulls’ campaign.

â€œI am ready to give 100 per-cent for this fantastic club, nothing else matters now,â€ said Fakir.

â€œI feel as though I have turned the page by coming to play for such a big name in rugby league.

â€œI am very happy to be here and am excited about what the future might hold for me here.

â€œI have plenty of hard work ahead but I am ready for the challenges ahead. Over the course of the season, I intend to make a big impact here.

Knowing that Bradford have not started the season as well as they would have liked, Fakir is hopeful to be a part of a resurgence for the club over the coming weeks.

â€œBradford have had a tough start to the season but Francis (Cummins) has done a fantastic job,” said Fakir.

â€œI am confident that things are going to turn around. I believe we will finish the season very well.

â€œTwo teams have to go down this year and I am certain Bradford will not be one of them.â€