Big win sees Penrith go to top of the ladder 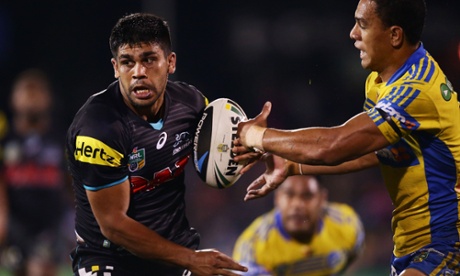 Many pundits had them billed as potential cellar-dwellars but they have been proven wrong, with the Penrith Panthers proving they are a force in 2014, recording a comfortable win over the Gold Coast Titans to move into first on the competition ladder.

Recording a 36-14 win over the Titans away from home, their superior for and against has seen the Panthers go above the Canterbury Bulldogs and the Manly Sea Eagles to the top of the ladder halfway through the season.

They were on a roll early on and overpowered the Titans side and although the second half was riddled with errors by both sides, the Panthers were the ones that showed the composure required to record the win.

Defensively, the Panthers held their own and in terms of their attack, live-wire back-rower Tyrone Peachey and instrumental hooker James Segeyaro were both at the top of their games in the big win.

The solid win by the Panthers was the third successive game in which they have scored 26 points or more and although some of the tries they scored were a tad bizarre, the win is what was most important.

Although it was not the most perfect game, Panthers coach Ivan Cleary knows they can get better and improve as a team despite their position on the ladder.

“We might have lost that game earlier in the season I think. I didn’t think we were quite on the money tonight, certainly that first half and you sort of got the feeling that we were never going to put the perfect game together but our defence got better in the second half and we were actually able to score some points on so that’s the pleasing thing,” said Cleary.

“We’re a little bit more attuned into understanding that we can still win the game if you’re not right on top of your game and that’s important, because you can’t be at your best every week.”

The belief has been the key for the Panthers and it was crucial in this game especially, given the improvement they still have in them.

“I think we realised at half-time there were certain things which we had to get better at whereas earlier in the year if we couldn’t play our best we’d just [accept] that it wasn’t going to be our night,” said Cleary.

“Maybe just that belief and getting used to playing with each other and growing together as a team.”

A worrying sign for the Titans is the inconsistency of key halfback Albert Kelly, who is still troubled by a leg injury suffered in Rd 8.

Although the effort from him is there in-game, even his team-mates can see that the injury is preventing him from playing the same style of game.

“He’s not playing the razzle-dazzle football we were playing at the start of the year,” said Gold Coast Titans captain, Greg Bird.

“I don’t know whether that’s off the back of the forwards not getting forward and getting momentum in our attack or the fact that he’s coming off an injury but it’s obvious that he’s struggling with the confidence.”

The last three games have been tough ones for the Titans as they have been in a position to potentially win but have had the other team take the game away from them. For their coach John Cartwright, he does not believe that the scoreline was an accurate reflection of the game itself.

“When you lose games your confidence suffers and that’s where we are at the moment,” said Cartwright.

“I really don’t think that scoreboard tonight was a true reflection of how the game was. It was pretty hard-fought and there were some dumb errors and often you don’t get punished by points when you make some dumb errors but they punished us three times and come up with 18 points.”