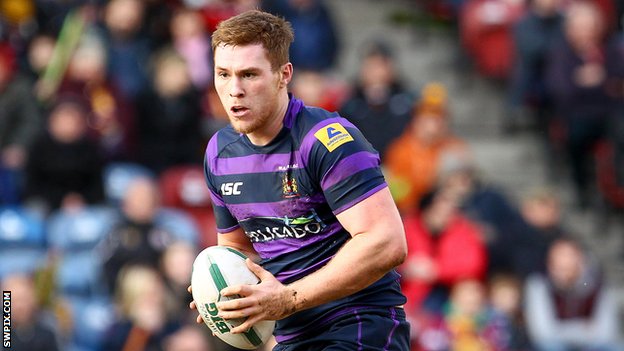 Players changing teams is becoming part and parcel of the game and it comes for many reasons. For young Wigan Warriors prop Scott Taylor, it was simply about a new challenge and testing himself elsewhere.

The decision agreed to by all will see Taylor depart the Warriors with immediate effect and join the Salford Red Devils on a 1-year deal.

Wigan Chairman Ian Lenegan opened up on the decision to let Taylor go, after the player came forward and discussed his ideas with the club.

“We can confirm that Scott is leaving the Wigan Club to join Salford Red Devils on a 12 months Contract as replacement for his final contracted year at Wigan. We have been speaking with the player for several months after he made it clear that he wanted to leave, preferably a year earlier than contracted, to return to the Hull area for family reasons.

Scott has improved as a player under the Wigan system and is a good Prop Forward but his desire to be elsewhere has become, and remains, a significant distraction to team spirit and to his own performance.

With several shifts in the front-row for the 2015 season, the club, whilst disappointed to lose Taylor, believe they are well equipped for what lies ahead.

“With Lee Mossop recently returning to the Club and an array of quality Prop Forwards now at our disposal, we are confident in the squad we have for the 2015 season. We have been able to negotiate a satisfactory transfer fee for a player who would otherwise have left for nothing in 12 months’ time,” said Lenegan.

“We have worked well with Marwan Koukash at Salford to achieve a mutually satisfactory conclusion to this difficult matter and wish Scott Taylor well”.

Knowing how well he has developed coming through the Wigan ranks, coach Shaun Wane admits that he is a tad disappointed to lose such a promising young player.

“Scott expressed a desire to leave and whilst we made great efforts to help him change his approach his understandable need to meet his family obligations has remained the major factor in his decision,” said Wane.

“The arrival of additional good players at Wigan through some excellent recruitment has meant we can now allow him to leave.

“It is a pity to lose a player of Scott’s potential calibre early. He has really developed well in our system and he has done a great job for us but I am really happy with the make-up of my squad for next season as we look to go one step further at Old Trafford next October.”

Having represented the England Knights on two occasions and making his mark in the Super League, the Salford Devils are pleased to have Taylor on board.

â€œWe are delighted to have signed Scott Taylor for 2015, itâ€™ll be great to be working with him again,” said Salforc

â€œHe has a fantastic temperament and has great potential to go far in the game. At 23, he has a wealth of Super League experience, including Challenge Cup and Grand Final appearances, so he brings a lot to the team.

â€œWhen I first heard that I had another opportunity to work with Scott I was overjoyed and I think heâ€™ll be the final piece of the jigsaw for our 2015 Season.â€