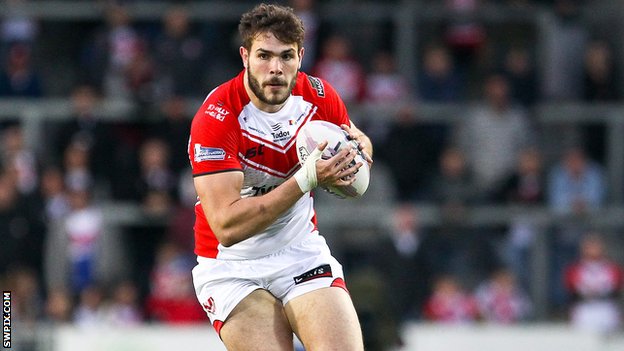 After rejecting overtures from some NRL sides, St Helens prop Alex Walmsley has opted to remain with the club after signing a new contract.

It was just two-and-a-half years ago when the Saints signed Walmsley from Batley and since that time, he has improved and become an elite prop for the club and in the game.

To date, he has played in 62 games for the club and the new deal will see the prop remain at the club until the end of the 2018 season.

Walmsley was pleased that the club could see just how well he is playing and was thankful to stay with them for the long-term.

“I was really happy when (St Helens coach) Keiron Cunningham approached me about renewing my contract,” said Walmsley.

“I’ve had quite a good start to the season and it felt good that they wanted to reward me for my form. I was delighted to do so as since I have come here I have been made to feel very welcome by the players, staff and the board of directors.

In the end, it was an easy decision for Walmsley because the club expressed a genuine desire to retain him and that was what appealed to him.

“I was an easy decision to re-sign,” said Walmsley.

“I had offers from the NRL which I naturally had to think about. There is obviously a pull there as it is a prestigious league but credit to Keiron. He made it clear he wanted to keep me and in the end that was the deciding factor.

“I have fallen in love with the town since I moved down here and the fans have been great with me. What we are building at St Helens is special.”

Forh the club itself, having seen Walmsley develop as a player, re-signing him was a no-brainer. His efforts continue to impress St Helens coahc Kieron Cunningham.

“We’re delighted Alex has agreed a new contract with the club. It’s clear his progression from amateur to professional has been phenomenal and already this season he is proving to be one of the best forwards in the competition,” said Cunningham.

“What I like about Alex is his ability to learn and realise he isn’t the finished article. He is keen to improve and trains very hard. I have no doubt he has all the attributes to become one of the very best in the game.”