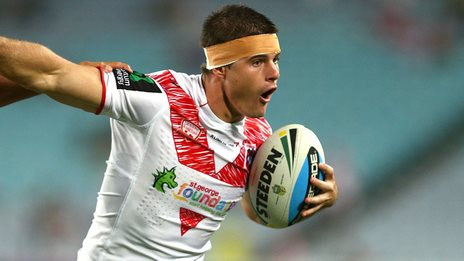 A move that has surprised a fair few fans, St George Illawarra Dragons young gun Charly Runciman has been granted a release by the club to head overseas and play in the English Super League.

The talented centre/winger has signed with the Widnes Vikings and can play for them as soon as he organises the appropriate visa, in a surprise move given his ability, potential and good form that pleased fans during his time at the Dragons.

Making his debut in 2013, Runciman went on to play 13 games for the club and after receiving the offer from Widnes, the club opted not to stand in his way.

â€œCharly has received an opportunity to play regular first-grade football with the Widens Vikings on a multi-year contract which he has opted to explore,â€ said Dragons Director of Recruitment & Retention Peter Mulholland

â€œOn behalf of the Dragons we would like to thank him for both his services and contributions to the Club and wish him well for the future.â€

Whilst hard to leave the club, Runciman knows that it is all about opportunity and with a chance to play regular first-grade at a quality level, it was just too good to pass up.

â€œI have had a couple of great seasons with the Dragons and will look back on my time here with fond memories,â€ said Runciman.

â€œI was privileged to make my first-grade debut for the Club and don the jersey that many have before me and play my role for the team in front of such passionate Red V Members and fans,” said Runciman.

The young centre is excited about what is to come for him at Widnes and was quick to praise all involved at the Dragons for giving him the opportunities.

â€œThe opportunity however to play regular first-grade football with the Vikings was appealing to me and something that will help me progress as a player,” said Runciman.

â€œI am thankful for my time with the Dragons and now look forward to starting the next chapter of my career.â€

The signing of Runciman will create some healthy competition in the outside backs for Widnes, and his signing is one that has pleased coach Denis Betts.

“Charly is a fantastic acquisition for us at this stage in the season,” said Betts.

“He will give us a really big boost and his arrival will make for some great competition among our outside backs.

“Charly has a proven try-scoring ability and will add some great quality to our edges. He is a strong centre with a fantastic left-foot kick. It will be great to have him over here as part of the Vikings set-up.”