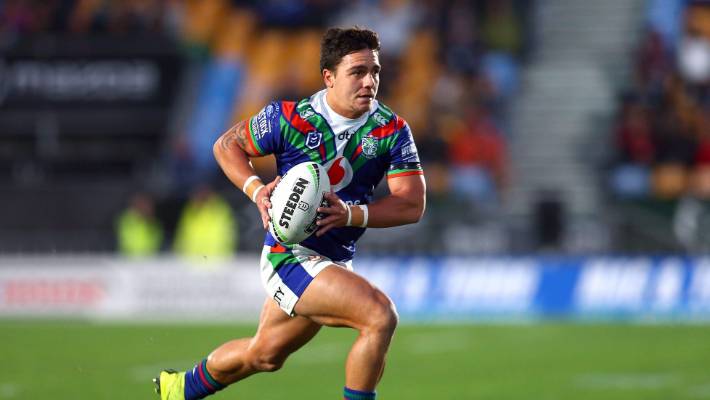 The New Zealand Warriors have held on to defeat Des Hasler’s Manly-Warringah Sea Eagles in a high-octane, end-to-end clash at Brookvale Oval.

Both sides traded points as the momentum swung throughout the clash, but the Manly side wasn’t able to triumph for their coach in his 400th NRL match.

400 #NRL games and just the ninth coach ever to reach the milestone ? pic.twitter.com/J1ywLVz658

The Warriors retained control of over 95% of the ball in the first six minutes of play and reaped the rewards through a diving try to Patrick Herbert.

They soon extended their lead through Elisea Katoa, who latched onto a deft grubber kick to score the Warrior’s second of the night.

Repeated ruck infringements continued to haunt Manly in the early exchanges as the Warriors completed three times as many sets as Hasler’s men through twenty minutes.

The Warriors were able to cash in on the extra possession with George Jennings slicing through the defence for his first try in Warriors colours.

Manly failed to go away however, and their comeback hopes were ignited when Karl Lawton was sent to the sin bin for a professional foul.

Tevita Funa crossed the line in the following set to cut the deficit to ten points before Moses Suli capitalised on the man advantage to score on the right flank.

After an action-packed first half that included the loss of Addin Fonua-Blake to a leg injury, Manly appeared set to carry the momentum into the break. Todd Payten’s men had other ideas however, failing to give up on the play in their final set of the half.

Herbert grabs a double with a lovely finish
? #NRLManlyWarriors#TelstraPremiership pic.twitter.com/IsiTYegY6A

This lead to a spectacular four-pointer from Patrick Herbert with just seventeen seconds remaining.

The second-half followed the trend set in the first, with the Warriors opening the scoring through Pita Hiku.

Jack Hetherington then found himself in the sin-bin following a nasty high-shot on Manly enforcer Martin Taupau. Taupau was forced off the field for a head-injury assessment.

Haumole Olakau’atu scored in the ensuing set, crossing for his first NRL try.

When Jorge Taufua crossed with fourteen minutes to go, the Warriors’ lead was cut to four and the game was given a grandstand finish.

However, the gallant Warriors were able to hold on for the remainder of the half and secure their fifth win of the season. Remarkably, the win puts Payten’s team just one win behind eighth spot (pending the remaining results from Round 13).

Post-match, Des Hasler acknowledged the torrential rain that threatened to stifle his side’s attack throughout the night, but stated that there were no excuses for his side’s performance.

“Yeah it was a terrible start and we didn’t recover from it well… it’s something that we need to fix pretty quickly” Hasler said.

On the other side, Todd Payten was extremely pleased with the way in which his squad played, stating that there was ‘no doubt’ that it was the best performance that the team have put together since he took the reigns.

The task gets no easier for the Warriors next week as they face the competition-leading Penrith Panthers on Thursday night, while Manly will face Newcastle in a crucial clash that could determine the fate of their finals chances.

3 Points – Kodi Nikorima – There wasn’t much to separate the two Warriors halves tonight. They both played well with two try assists, over forty touches of the ball and one goal from two conversion attempts. Nikorima’s kicking game and threatening runs got him over the line for the 3 points.

2 Points – Chanel Harris-Tevita – The man dubbed ‘CHT’ was the perfect foil to Kodi Nikorima as the pair combined well in their first game after the sudden departure of Blake Green.

1 Point – Daly Cherry-Evans – 2 try assists and a try contribution tonight for the Manly halfback. He’s doing everything he can to drag his side into finals contention but unfortunately the injuries to Tom Trbojevic, Curtis Sironen, Dylan Walker, Joel Thompson and now Addin Fonua-Blake are threatening to derail their 2020 campaign.