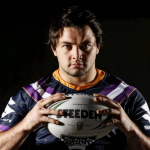 It was Papua New Guinea against Fiji to round out a cracking week of international footy and in the end, the Papua New Guineans sprung the upset to defeat the Fijian side.

The Fijians got the first chance at points attacking the Kumuls line with Nautu’a Masima putting in a sliding kick into the in goal that was contested but dealt with by Robert Derby.

The Kumuls remained under goal line pressure as the Fijians looked to pounce early.

The Kumuls turned Fiji away with a poor kick from Kevin Naiqama and were assisted by a well earned penalty by David Mead.

The Fijians fought back to regain the field position they had lost.

As the game wore on, the speed of the Fijian side appeared to trouble a somewhat tepid Papua New Guinean outfit in the opening stages.

Kevin Naiqama was the one who answered the call as repeated sets on the Kumuls line proved to be too much.

In the end, a dribbled kick in behind and a fumbled ball saw Naiqama grounding the ball untouched next to the posts. Masima added the extra two.

Throughout the first twenty minutes the Fijians, were the side well on top; a 6-0 score line was kind to the Kumuls.

The outside backs continued to lay the platform for Fiji, with the Kumuls struggling to to earn any attacking field position.

Up against all the possession and field position, Justin Olam found a way, beating Naiqama and Semi Valemei on the outside.

Lachlan Lam supported him up the middle and receives the ball after Olam’s run and scored under the posts.

Against all odds, the Papua New Guinea side defended their own goal line once more after numerous plays on each edge with multiple Fijian players being held up over the line.

Closing in on half time, Nixon Putt brushed off Tui Kamikamica to generate some great momentum for the Kumuls.

Soon after, a poor pass from Liam Horne looked to kill off the half. However, McKenzie Yei wasn’t finished, as he showed his barnstorming strength and power.

Yei stepped back on the inside of multiple defenders and bulldozed his way over the line carrying two defenders with him.

Papua New Guinea led 12-6 at half time with Laybutt adding the extra two.

As the second half progressed, the Kumuls found themselves as the dominant side this time.

Laybutt went over the line but the try was taken away from him due to double movement with the half not being able to resist the urge to put the ball over the line.

Shortly after, penalties given away by the Kumuls put Fiji back on the attack. This time the Fijians made no mistake as Taane Milne put in a beautiful deft kick and Sunia Turuva finishes the play.

As the half progressed, the game fell into an arm wrestle in the middle of the field with multiple sets littered with many brutal runs and tackles by both teams.

Lam left his stamp on the game, as he shaped to kick, he stepped back on the inside and sliced straight through the defence.

In his final game, the captain David Mead up in support and scored what ended up being the game winner.

The Kumuls ended the game with a flurry.

Olam recieved the ball on the short side and the just when the play looked dead, a deft kick back on the inside completely sold the defenders and Lam finished off the play.

Laybutt added the extra two all but ending the contest with a 24-10 score line.

In the dying seconds the Fijian’s threw caution to the wind, broken play and a dribbled kick by Viliame Kikau assisted Sunia Turuva in scoring his second try of the match in the final seconds.

The match ended 24-14 with Milne missing the conversion after the siren had sounded.